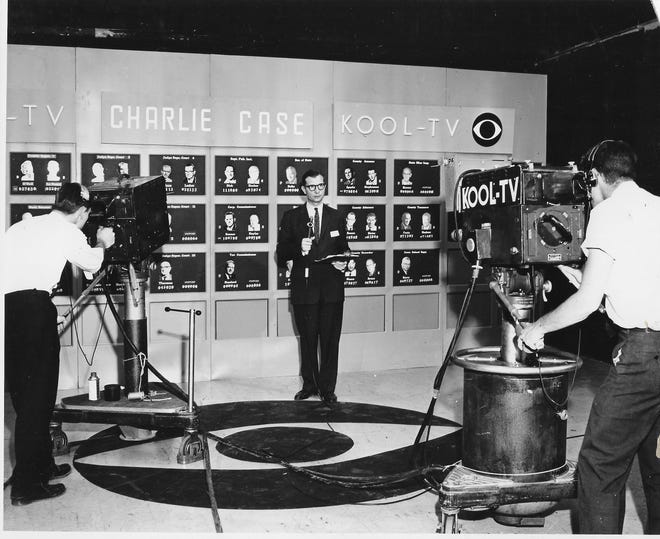 Childhood memories of when my parents brought home our first television are etched in my mind. As a fifth grader, this was a big deal! A small screen (who knew how big they would get); limited airtime with only two channels available (now 24/7), but no more numbers on the dial (now more options than I can count); black and white only; test screen images; and snow.

I had my own radio, but a television was so different, and it became a presence in our home. So much so that once my dad brought home the TV he had in his office to watch the two football games that were going to be shown. Good idea, but both channels aired the same game.

There has never been a train station in our town, so there was no behind-the-scenes tour. In fact, for me, it wasn’t until I moved to Phoenix that I finally had that opportunity. And now I’m hooked on learning more about the history of what the studios were like.

1950 seems to be a pivotal year for Phoenix and the television networks. The FCC froze granting new stations, but our local radio stations persisted. By mid-1953, KOY and KOOL had permission to broadcast on Channel 10. Then they received approval that same year from the Phoenix Parks Board to erect a transmission tower on South Mountain. Yes, these towers have been on South Mountain for a long time.

But the stations still needed writers, producers, cameramen and all the other behind-the-scenes personnel. In early October 1953, KOOL-TV planned to broadcast a test pattern. Nothing fancy about it, and a lot of people enjoyed watching it. But that would only prove that the station could work. Channels 5 and 12 already aired shows such as “Pepsi-Cola Playhouse” and “This Is Your Life”.

Finally, on Sunday, October 25, 1953, KOOL-TV was ON AIR as a joint operation with KOY-TV beginning at 4 p.m. and ending at midnight. To show how things have changed, in November 1953, Governor Pyle tours major radio and television stations delivering his speech to the people of Arizona.

What a pleasure to read the section of the newspaper that lists all television and radio programs. Most programs were provided by the networks, but those produced locally are often the most remembered. Lew King’s Rangers began as a stage musical talent show before becoming a hit on radio and later television. Did you know that Wayne Newton, Tanya Tucker, Lynda Carter and Marty Robbins were just a few of the homegrown talents on this show? And don’t forget Wallace and Ladmo!

Today, equipment is lighter, more compact and often works remotely. Nonetheless, for those curious about the “dark age” of early broadcast in the Valley, you have the option of viewing an exhibit at the Arizona Heritage Center, 1300 N. College Ave, Tempe, which will be open until July 2023. The House of Broadcasting donated items for this exhibit which focuses on Arizona news broadcasting on both radio and television.

Donna Reiner is co-author of three books on the history of Phoenix.