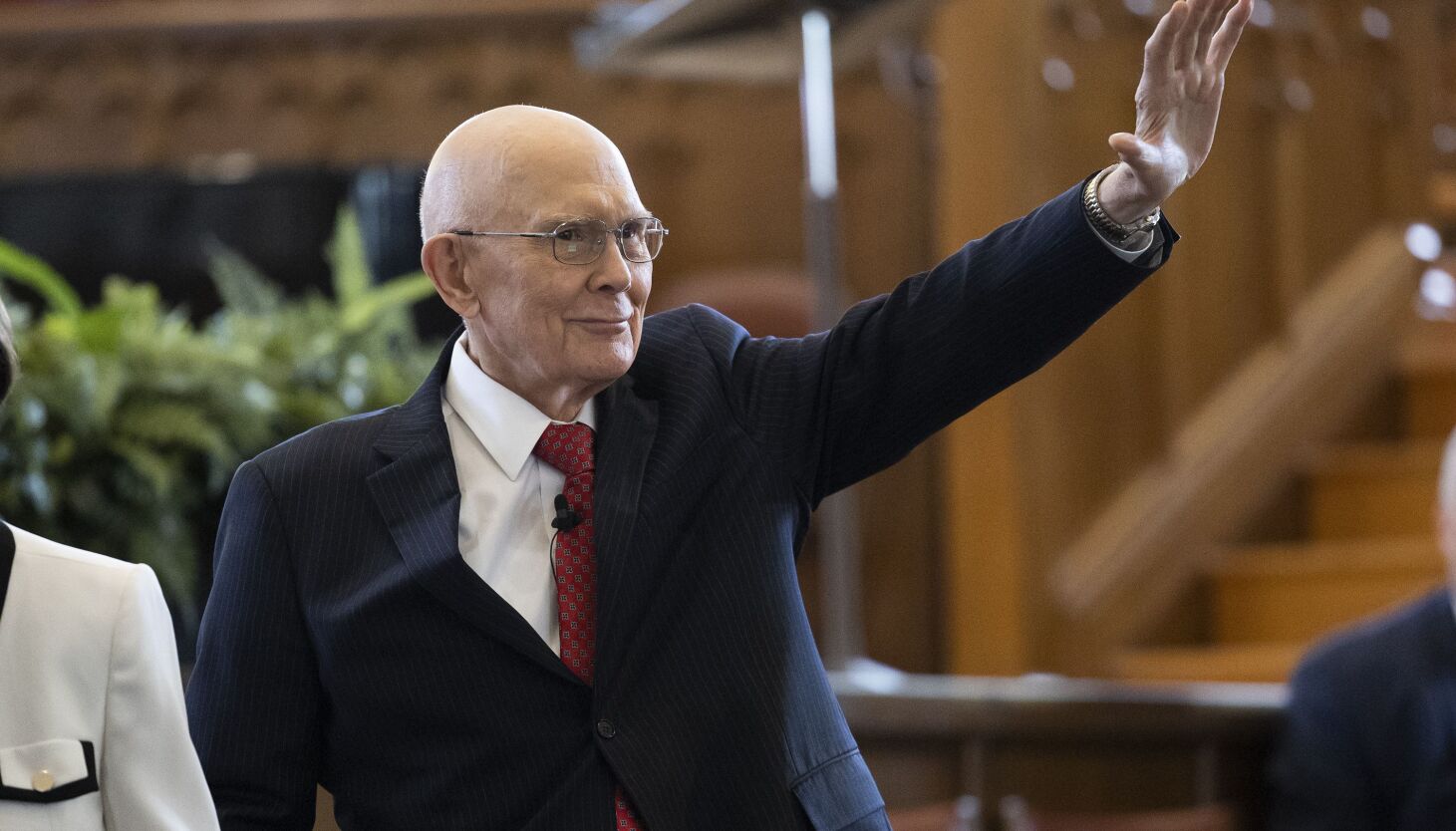 Few students watch black-and-white reruns of Candid Camera, America’s first “reality” show. But on Tuesday, at a religious meeting at Ensign College in Salt Lake City, President Dallin H. Oaks of the First Presidency of The Church of Jesus Christ of Latter-day Saints stood alongside Commissioner from the Church to Education, Elder Clark G. Gilbert, and together they caught the attention of their young audience with a music video from Candid Camera’s famous hidden-camera elevator episode.

In the middle of the 20th century, the social psychologist Solomon Asch launched a series of experiments aimed at studying the influence of the group on individual conformity. Drawing inspiration from Asch’s work, in the music video, Candid Camera has three actors step into an already busy elevator and face the opposite direction of the door.

What ensues is pure situation comedy.

The involuntary subject in the elevator looks at the actors with slight bewilderment. But then, slowly, the subject begins to comply by turning around even as the individual’s facial expressions betray the absurdity of the situation.

To paraphrase a 19th century religious leader, people tend to “conform to the society they live in” or, in this case, the elevator in which they travel.

But Christianity often demands something different, and for Danish theologian Soren Kierkegaard, the crux of Christianity was nonconformity.

Kierkegaard’s philosophical treatises make it clear that he did not aim to appease mass tastes. Even the titles of his books are, in the words of researcher Michael Sugrue, “pretty repulsive” – ​​take for example “The Concept of Dread”, “The Concept of Anxiety”, “Fear and Trembling” or, my favourite, “Sickness until death.

Kierkegaard was skeptical of popular opinion. In his book “The Present Age” and other texts, he explores how cultural conformity fosters a “follow the crowd” mentality, fueling spiritual laziness. A true Christian – or, in Kierkegaard’s vernacular, a “knight of faith” – chooses faith even in the face of strong social pressure.

Kierkegaard was drawn to Job, the biblical figure who remained pious and faithful despite losing everything. Even his wife urged him to just “curse God and die.” It is “impossible” to describe the significance of Job, wrote Kierkegaard: “I do not read (Job) as one reads another book with the eyes, but I read this book so to speak with my heart, with the eye of the heart I read it.”

On Tuesday, President Oaks and Elder Gilbert called on modern Christian followers to stand firm in their faith. Lead with love, they warned, but stay committed to the gospel of Jesus Christ even when others face a different direction in the elevator.

Standing firm in the faith today requires navigating polarizing tensions properly. It takes vulnerability and courage to balance the demands of Christianity, which often transcend traditional political poles. There is a kind of security in conforming to political extremes. The crowds seem bigger and the voices louder. But sometimes the gospel requires a bit of self-containment.

On racial reconciliation, President Oaks and Elder Gilbert highlighted the teachings of Christ and the Church’s efforts to combat racism and help those who face prejudice. They also emphasized the inspired nature of the US Constitution and the importance of avoiding extremist ideologies. On LGBTQ issues, they discussed the church’s counsel to lead with love and charity, detailing ongoing efforts to support policy protections in housing, health care, and employment for LGBTQ people. President Oaks and Elder Gilbert also emphasized the importance of firmly upholding religious freedom and the gospel teachings about the family.

Conformity is complex and group dynamics can go both ways. Religious communities, for example, can help support disciples in their efforts to remain steadfast in faith, even when it goes against contemporary culture.

Drawing on Asch’s seminal conformity experiences, social psychologist Jonah Berger of the University of Pennsylvania carried out more recent experiments try to understand why some people choose do not conform under peer pressure.

What Berger discovered was the role that “social identity” plays in an individual’s decisions. Young people, for example, are more likely to make different choices than older generations when it comes to clothing styles or music due to a strong generational social identity – i.e., millennial, Gen Z.

In other words, what we consider our most basic social identity matters when it comes to holding on, becoming a knight of faith, or looking in the right direction in an elevator. Small wonder, then, that President Oaks and Elder Gilbert have both echoed Church President Russell M. Nelsons’ recent counsel on identity to young Latter-day Saints around the world:

“There are various labels that can be very important to you, of course,” President Nelson said. “Please don’t get me wrong. I’m not saying other designations and identifiers aren’t meaningful.

“I am simply saying,” he continued, “that no identifier should displace, replace or take precedence over” the three most “permanent” designations of child of God, child of the covenant and disciple of Jesus Christ.