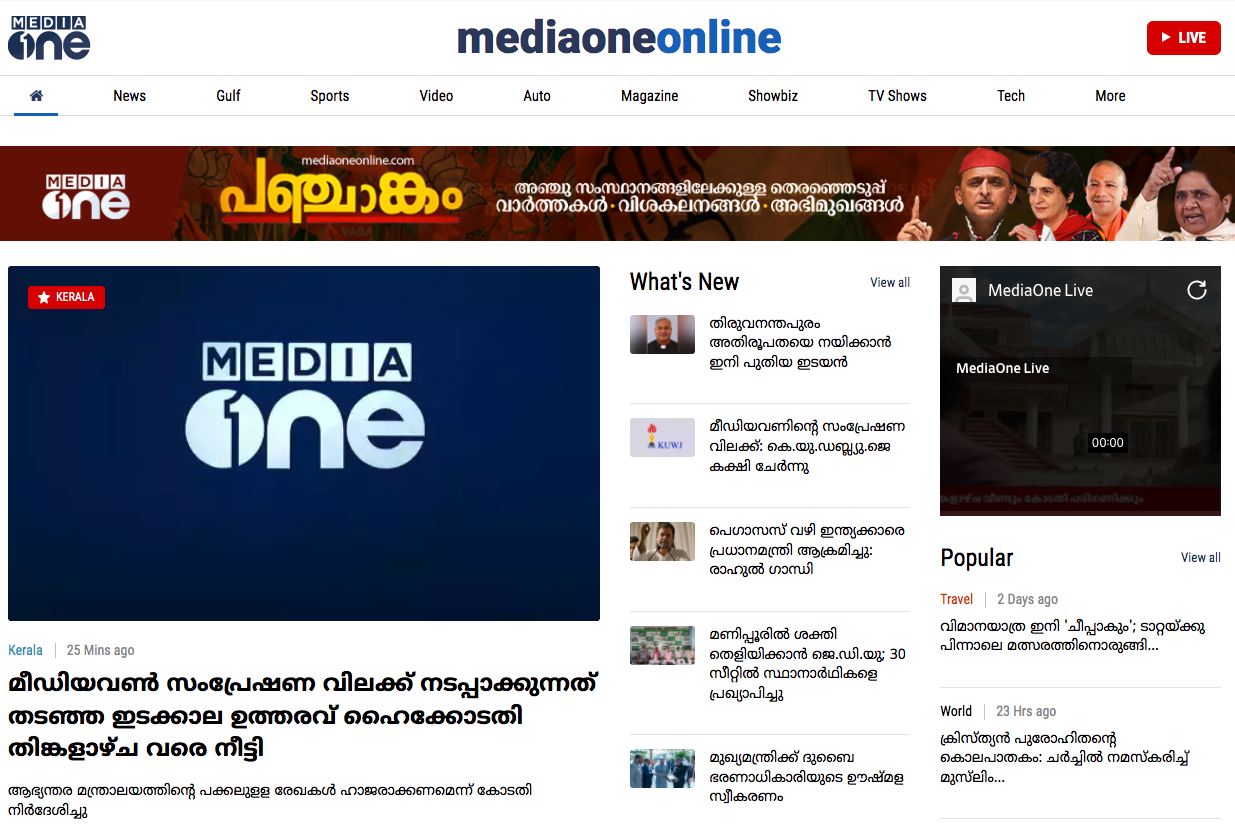 The Kerala High Court today extended its block on the Indian government’s recent decision to revoke the license of news channel MediaOne. The global IPI network welcomes the court’s decision and urges the government to drop its efforts to shut down MediaOne over vague “national security” concerns.

On January 31, India’s Ministry of Information and Broadcasting shut down the Malayalam news channel MediaOne TV, citing “national security reasons”. The channel was unable to broadcast for a few hours until the Kerala High Court granted a two-day reprieve, then resumed broadcasting. On February 2, the court issued an extension of the suspension, allowing operations to continue until February 7.

All broadcasters in India must obtain government security clearance to receive a broadcast license. MediaOne has had one since 2011 and recently submitted a renewal authorization. The security clearance lasts 10 years. On January 5, the Home Office, which approves the clearance, issued a show cause order to MediaOne, asking why its clearance should be granted and not revoked.

MediaOne said it did not know the reasons why the clearance would be revoked, noting that the order simply states that security clearance is based on “parameters” set by the Home Office. There are no other reasons given.

“A government should not be able to arbitrarily invoke ‘national security’ as grounds for revoking a media outlet’s license,” said IPI Deputy Director Scott Griffen. “The closure of a television channel constitutes a serious violation of the public’s right to information and must therefore be subject to very strict rules and procedural guarantees which respect freedom of expression. The decision to revoke MediaOne’s license without proper justification sets a dangerous precedent and should be quickly reversed.

India’s Deputy Solicitor General, appearing in the High Court on February 2, referred to a 2019 Supreme Court decision which upheld the cancellation of licenses if a news channel had no security clearance. He ruled that the party was not entitled to notice of closure.

But in 2021, the Supreme Court also said the state cannot get “a free pass whenever the specter of national security is raised”, in a case involving India’s use of the Pegasus app. “National security is not a bugbar that the judiciary shuns, by virtue of its mere mention,” the court said. In this case, the Court ordered the creation of an independent committee to investigate the government’s use of the surveillance app.

The Kerala High Court has ordered the government to produce the relevant records by February 7, showing how the cancellation of MediaOne’s license is linked to national security concerns. The government said it could not release the information to the public but could produce it under seal.

This is not the first time that Mediaone has been targeted by the government. She was briefly suspended in 2020 for her reporting on the Delhi pogrom, according to the channel. The government then called the channel’s reporting “biased”.