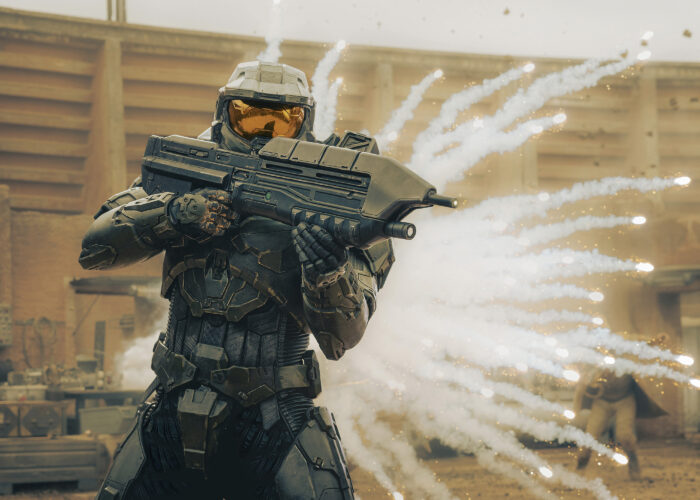 The TV adaptation of “Halo” – airing Thursday, March 24 on Paramount+, produced by Amblin and developed by Kyle Killen and Steven Kane – is based on the hit video game but not part of its established canon. Instead, it’s a condensation of the lore-rich universe into a manageable televised space opera.

The show follows Master Chief John-117 (Pablo Schreiber), a giant genetically engineered super soldier who works for the imperial and vaguely fascist United Nations Space Command in the 26th century. A civil war is underway between the various colonies of this universe, and a confederation of alien races called the Covenant have begun attacking the outposts as they search for ancient artifacts which they believe will lead them in Paradise.

The first episode opens with one of these attacks. The Human Rebels at the Outposts are a ragtag group that hate Space Marines and Spartans, like Master Chief. When the Covenant forces arrive, they are brutally slaughtered by the aliens’ superior technology, even after Master Chief arrives to aid them. The sole survivor is Kwan Ha (Yerin Ha), whom Chief takes with him on what turns out to be a journey of self-discovery.

The comparisons to “The Mandalorian” are inescapable. Both feature battle-scarred warriors connecting with a young ward while hopping through adventures across the galaxy. It’s a very different dynamic to the game, where most of the narrative and characterization is between the stoic leader and his AI guide Cortana.

And while “Halo” is a better outright space story than samurai trappings borrowed from “The Mandalorian,” the series takes itself a bit too seriously to be as enjoyable as the Disney+ spectacle. That’s always been the problem with “Halo,” which is why the bizarre and ridiculous parody web series “Red vs. Blue” did so well.

Ideally, adapting work from one medium to another should allow the project to expand beyond the capabilities of the original, and that’s what makes “Halo” so strange. While the action sequences aren’t bad, they’re also not better than things seen in the actual games. Aliens like the reptilian Sangheili look great, but why wouldn’t they? Game developer 343 Industries is partially producing this series, and it’s had years to learn how to make CGI villains reach their full potential on screen.

On the contrary, the human actors seem out of place. As grandiose as these scenes are, they just aren’t as visually or emotionally exciting as the last “Halo” game. When the shots go first-person, all it does is remind someone that they could play something as good or better than this instead.

The biggest problem is Master Chief. Like Super Mario, he is a character defined primarily by how players navigate him in digital space. Add to that “Halo”‘s long history as a multiplayer paradise (“Halo 3” ran its servers for 14 years, not stopping until 2021), and most of the series’ big stories happen. because players realize them in-game. That’s why a ‘Fortnite’ series would never work and why ‘Team Fortress’ stuck to comedy shorts.

Schreiber certainly gives Chief some soul, even if his interactions with Quan make it seem like Paramount+ just wants to release a story with that dynamic before HBO releases its adaptation of “The Last of Us.”

“Halo” may be a perfectly competent action story set in space, but it feels like a lesser version of things that came before, including its own source material.

I“Halo”: With Pablo Schreiber, Natascha McElhone, Yerin Ha and Charlie Murphy. Developed by Kyle Killen and Steven Kane. (TV-MA. Nine episodes of approximately 60 minutes each.) Premiering Thursday, March 24 on Paramount+. The following episodes were released from Thursday to May 19.

PUBLIC’S POINT OF VIEW! Why do sequels to hit and classic TV shows fail to create the same on-screen magic?