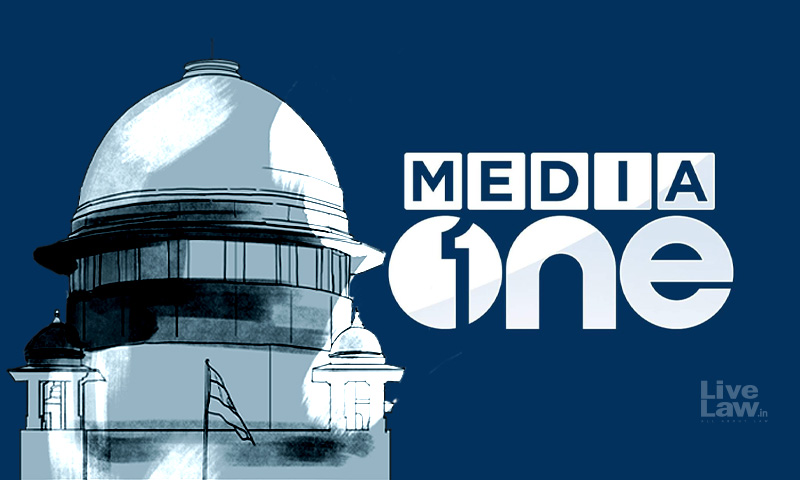 The Supreme Court on Tuesday began hearing the petition filed by the Malayalam news channel Media One against the order of the Kerala High Court upholding the broadcast ban imposed on it by the Ministry of Information and Broadcasting, by not renewing its broadcasting license.

Appearing before a bench consisting of Judges DY Chandrachud and Hima Kohli, Lead Counsel Dushyant Dave representing the channel, argued that the Cable Television Networks (Regulation) Act 1995, which also provides for the renewal of licenses, does not contemplate any security clearance from the MHA at the renewal stage.

He mentioned that sections 3 and 4 of the Act recognize initial and renewal applications. Article 4(6) stipulates the conditions to be met for such renewal. This includes interests of sovereignty and integrity of India, state security, friendly relations with foreign states, public order, decency or morality, foreign relations or contempt in court, defamation or incitement to an offence.

Dave argued that if any of these requirements are not met, a person is not eligible for registration and renewal. However, he said the government cannot add conditions out of the blue. “The inclusion of additional criteria should be interpreted sui generis in relation to government criteria… Freedom of the press is at the center of the controversy.“

“Under a security clearance, while I was not charged with violating any express conditions, I did nothing against the public interest, the national interest, can I have the renewal authorization refused? … In accordance with the provisions, the renewal will be considered for a period of 10 years at a time, provided that the channel has not been found to have violated the terms and conditions, including the violation of the program and advertising code 5 or more times. In my case, there was not even a single violation.“

He argued that where two original applications and a separate renewal application are time-barred, they should be dealt with on those terms.

“The requirement for a security clearance is only at the channel request threshold stage, not renewal,‘ said Dave.

Here, the bench orally remarked that even for renewal, a person has to undergo the whole process. “To say that security is required for the initial stage and not for renewal is a bit…because on renewal you will have uplink rights.“

On January 31, hours after the ministry suspended the channel’s broadcast for security reasons, MediaOne approached the single judge with a plea. The Jamaat-e-Islami-owned channel ceased broadcasting the same day.

The channel argued in the motion that the exact reasons for not renewing the Centre’s license had not been disclosed to it and the court approved the decision based on certain sealed records produced by the Home Office, which would have raised national security concerns.

The Claimant further submitted that the impugned judgment was manifestly unlawful since clauses 9 and 10 of the uplink and downlink guidelines state very clearly that for the purposes of license renewal, security clearance is not a factor to consider.

Further, as there has not been a single complaint or action against the petitioner in the past 10 years, it has been asserted that the renewal was a matter of law for the petitioner on the plain reading of clauses 9 and 10.

Reference was also made to the judgment of the Supreme Court in Manoharlal Sharma Vs. Union of India (Pegasus case) where it was held that the scope of judicial review in national security cases is limited, however , it does not mean that the state gets a free pass every time the specter of national security is raised.

On February 8, a single bench of Judge N. Nagaresh found that after going through Union Home Ministry records, he had found intelligence information justifying the denial of security clearance to the chain. .

Hurt by this, MediaOne had approached a divisional bench with an appeal. However, the division bench agreed with the single judge and confirmed the to forbid.

On March 15, the Supreme Court suspended the Ministry of Information and Broadcasting’s order refusing to extend the channel’s license under the Cable Television Networks Regulation Act. He had adopted the interim order in a special permission application filed by the company that runs the channel challenging the Kerala High Court judgment to uphold the decision of the Ministry of Information and Broadcasting not to renew the channel broadcasting license.

The hearing will continue tomorrow.