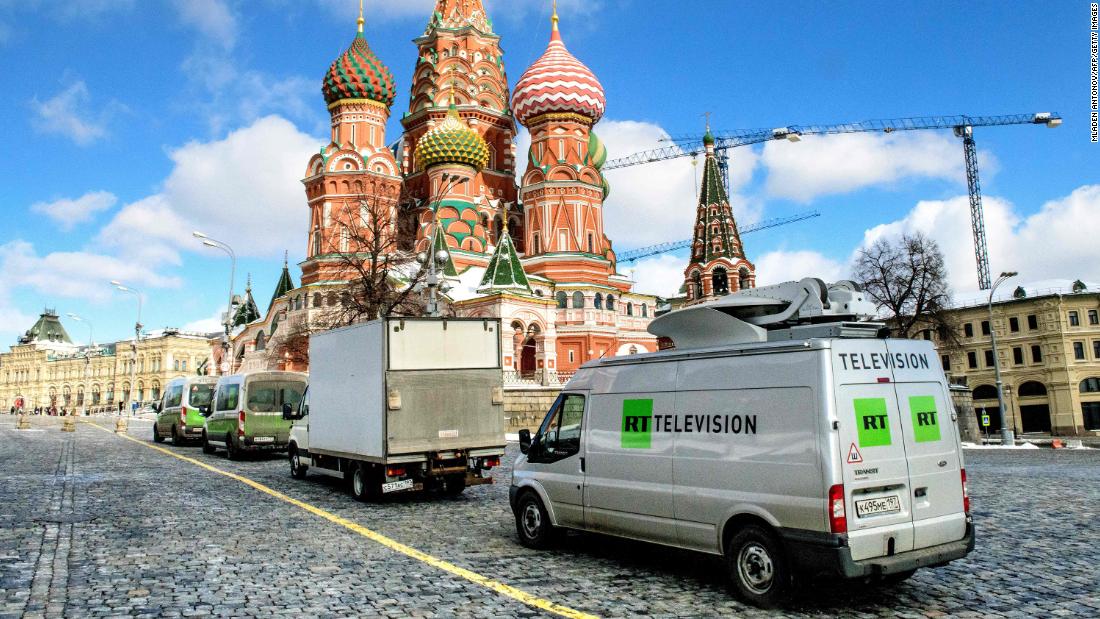 Britain’s broadcast media regulator Ofcom said it had carried out 29 investigations into RT’s coverage of the Russian invasion and considered the channel’s ties to the Russian state and new Russian laws that ” effectively criminalize” any journalism that deviates from the Kremlin narrative in relation to war.

“Freedom of speech is something we fiercely protect in this country, and the bar for action by broadcasters is rightly set very high,” Ofcom CEO Melanie Dawes said in a statement. . “Following an independent regulatory process, we have today found that RT is unable to hold a license in the UK. Accordingly, we have revoked RT’s UK broadcast licence.”

The European Union had already banned RT from broadcasting as part of sweeping sanctions imposed on Moscow in response to the invasion of Ukraine.

The measure suspended RT’s broadcasting activities in the European Union, or directed against it, affecting its English, German, French and Spanish networks. Ofcom confirmed in its statement on Friday that the channel was already off the air in the UK due to EU sanctions.

“It’s a continuation of the anti-Russian madness going on in Europe and the United States,” Kremlin spokesman Dmitry Peskov told reporters. “This is another step to grossly restrict freedom of expression, to violate all laws related to media work,” he added.

RT’s ability to project President Vladimir Putin’s talking points around the world has been significantly limited in recent weeks as cable companies and social media channels have abandoned the broadcaster.

DirecTV, one of only two major television providers in the United States to carry RT, said earlier this month it was cutting ties with immediate effect. A few days later, RT America decided to cease production and lay off most of its staff.

Ofcom’s decision could trigger further retaliation by Russian authorities against UK broadcasters such as the BBC. Russian media regulators restricted access to the BBC’s website earlier this week, after previously taking similar action against its Russian-language website.

“I think this is just the beginning of the response to the information war launched by the West against Russia,” Russian Foreign Ministry spokeswoman Maria Zakharova said in a statement on Wednesday. Telegram article.

RT had broken UK broadcasting rules on several occasions, long before the invasion of Ukraine.

In July 2019, Ofcom fined RT £200,000 ($263,000) for repeatedly breaching impartiality rules in its coverage of the Skripal poisonings and the conflict in Syria. He concluded that RT failed to maintain “required impartiality” in seven programs aired in March and April 2018.

The programs aired after the poisoning of former Russian double agent Sergei Skripal and his daughter. British authorities said they were victims of an attack carried out by agents of the Russian military intelligence service, the GRU.

RT said on Friday the UK ban was “political”.

“For many years in the UK they have been looking for a formal reason to shut down RT, but they have tried to maintain the appearance of free speech. Now the masks are up,” the channel said in a statement. communicated on his Telegram account.

Exploring the diversity and precariousness of French stand-up