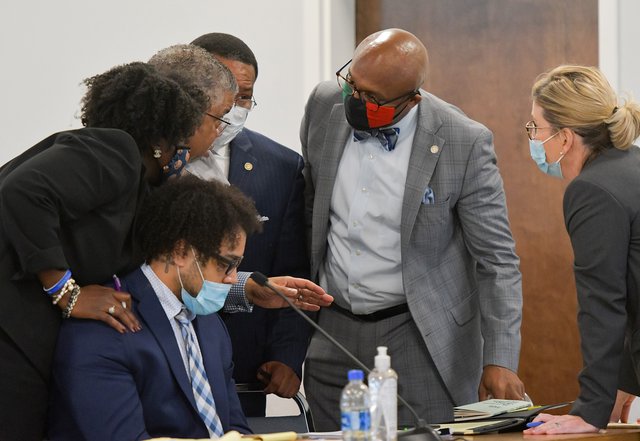 Judge to decide whether Judge Michael T. Muldrew should be removed from his duties in dealing with William Marcus “Marc” Wilson’s immunity hearing and possible murder trial in Bulloch County Superior Court will not compel Muldrew, prosecutors or defense lawyers to testify in open court.

Instead, Senior Judge Michael L. Karpf, who called a hearing on the defense disqualification motion at 9:30 a.m. Friday, told Wilson’s attorneys they could submit written questions, strictly limited to facts regarding the conduct of a previous hearing, which Muldrew, Ogeechee Judicial District Attorney Daphne Totten and Deputy Chief District Attorney Barclay Black will be required to respond with affidavits. District attorney’s office prosecutors can also submit written questions that two of Wilson’s defense attorneys, Mawuli Davis and Martha Hall, would be required to answer.

After giving these instructions and clarifying other matters in just over an hour on Friday, Karpf suspended the hearing, setting December 10 as the date for the resumption. But he also made it clear that he would not be announcing in court his decision to remove Muldrew as presiding judge in the pending murder case against Wilson on December 10 or any other day.

The Georgia Superior Court Uniform Rules require the chair of a challenge hearing to make a written decision including findings of fact and findings of law, Karpf told everyone in the courtroom in a brief. lesson on procedure.

“I’m telling you this to let you know that there will be no ruling from the bench at the end of the hearing, whenever we get there,” Karpf said. “It requires a written order, and it’s going to take some time to prepare.”

Another thing he clarified is that he won’t be deciding during this extended hearing whether Wilson’s lead defense counsel Francys Johnson was actually in contempt of court when Muldrew said he was in contempt of court. was on September 23, the aborted second day of Wilson’s immunity hearing. Johnson’s attorneys appealed the contempt ruling, which resulted in Johnson being detained by MPs in a judicial annex room for about six hours that day, to the Georgia Court of Appeals.

Marc Wilson, now 23, was held in Bulloch County Jail for more than 400 days on murder and aggravated assault charges on June 14, 2020, to the shooting death of 17-year-old Haley Hutcheson. Wilson never got bail after two bail hearings before Muldrew.

What is it about

Witnesses in previous hearings said Wilson, while driving his car on Veterans Memorial Parkway – the Statesboro Bypass – around 1 a.m. that Sunday, fired a handgun and that a bullet hit Hutcheson in the back of the head as she rode with four other teenagers in a pickup.

But defense attorneys have claimed that Wilson, who is biracial, and a white girlfriend at the time who was in the car with him suffered racist attacks, including insults and aggressive driving, from the share of the occupants of the truck.

The previous hearing, which began on September 22 and 23 but never ended, concerned a petition filed by Wilson’s lawyers to declare him immune from prosecution under Georgian law to “stand on his feet.”

At the hearing on September 23, Wilson’s attorneys said they saw documents in a notebook that had been handed to them, apparently in error, by a Muldrew court assistant, and the judge ordered Johnson to return them. He declined to do so, insisting that the documents should instead be sent to the court clerk, for an appropriate chain of custody.

When Muldrew ordered a sheriff’s deputy to seize Johnson’s notebook, the deputy did so, Davis said in an affidavit filed in September with the defense motion that Muldrew be recused from both the immunity hearing and the whole case. But soon after, Muldrew ordered MPs to remove Johnson from the courtroom.

In that original file, Davis said the filing cabinet contained copies of emails that were exchanged between Wilson and his parents and others while he was in jail. Davis asserted that the judge received Wilson’s emails as “potential ex parte communications” – that is, for one party in the case and not the other – and that he did not disclosed this to the defense.

An additional affidavit Davis filed Thursday – it was recorded by the court clerk’s office at 11:36 p.m. – more fully describes the incident involving the case and Johnson’s removal from the courtroom. He also reports, from a defense perspective, other examples of Muldrew’s handling of the September 22-23 hearing and remarks he allegedly made about Johnson and the case.

“Judge Muldrew further indicated that this case was a circus and that he failed to prevent it from becoming a circus,” Davis said in the closing lines of the new four-page brief.

Karpf, who retired as Chief Justice of the Eastern Judicial Circuit Superior Court in Savannah about three years ago, has around 40 years of experience as a trial judge. He was appointed by a district court administrator to preside after the two judges who currently share the Ogeechee Judicial Circuit Superior Court bench with Muldrew, Chief Justice F. Gates Peed and Judge Lovett Bennett Jr ., recused themselves from hearing the recusal motions.

In preparation for the hearing, Wilson’s defense attorneys had issued subpoenas calling Muldrew, Totten and Black as witnesses. Assistant District Attorney Matt Breedon then spoke on behalf of the DA’s office as the state sought to overturn Karpf’s subpoenas and prevent both lead prosecutors and the judge from having to testify.

Karpf asked why the state included Muldrew in its petition, since the judge cannot be represented by prosecutors. Breedon alleged the defense was seeking to call Muldrew as a witness as a tactic to force his withdrawal from the case.

“This is the state’s claim that this was done as a way to shop around for the judge, because once he is subpoenaed and called as a witness there is a good chance he will be disqualified. to sit on the case because he took an unfavorable position, â€Breedon mentioned.

He argued that if Muldrew himself had sought to be exempt from the subpoena, even that could have the same result.

As for the testimony of Totten and Black, Breedon claimed they would not know anything about what happened during the hearing on September 22 and 23 that cannot be learned from the transcript or other sources. The events of that day took place in open court, in the file and “in view of the television cameras which recorded the entire procedure,” he said.

But one of Wilson’s attorneys, Gary Spencer, said the defense believed prosecutors might have some answers on the correctness of the way the notebook was handled. Muldrew court was “in possession for a while, we don’t know how long … information that should have been given to the defense, but was not,” Spencer said.

Karpf said the record of other cases indicated that putting a sitting judge on the witness stand at such a hearing would be “fraught with problems” and that he also could not imagine allowing defense lawyers to cross-examine prosecutors, and vice versa. .

So what he will allow, in the form of written questions, are “factual inquiries only”, having to do with the September hearing, which he will consider before deciding whether they are appropriate. He put Davis and Hall in question because they had included themselves on the defense witness list.

“For Judge Muldrew, this is strictly limited to factual issues relating to the hearing of these two days,” Karpf said. â€œIt has to be worked very closely. I will not allow questions to widen the controversy so that his future participation becomes impossible.

Referring to Thursday’s supplemental affidavit, Karpf also warned lawyers that he “would not be happy to get any further documents at midnight.”